April 5, 2018 I had an exclusive invite to cover the “Experience Georgian Culture” party held at the Georgian Embassy (1824 R street, NW, Washington D.C).

For this party, I wore a black v-neck shirt from Macys, and a long black skirt, with intricate gold designs embroidered at the bottom from Nordstrom. The commute was long, difficult but worth it. I knew finding parking around certain embassies would be arduous so I decided to park my car at Bethesda metro station, metro to Dupont circle and just walk the rest of the way.

Tickets for this event were around $40 and this price includes authentic food, art exhibition, entertainment, and a complimentary swag bag.  The Georgian Center, in partnership with the Embassy of Georgia, sponsored this entrancing party. The embassy, itself, was crowded with a variety of folks ranging from Georgian denizens, DC wonks, and media outlets. The house had expansive floors, an ornate staircase with inscriptions, and a variety of art hung along the walls. There was a complimentary coat check, as soon as you walked through the doors.

An extensive buffet had a hungry crowd, armed with red and white Georgian wines, and well tailored dresses and suits, forming a polite queue.  The food emanated a warm touch with the crowd, as many foodies enjoyed sweet and savory treats melded with an array of spices and herbs such as tarragon, dill, flat parsley, and coriander. Kachapuri, a warm, gooey, cheese bread, enticed and evinced a homey-nostalgia with native Georgians.  Foods such as Badrijan Nigzit which is roasted eggplant served flat with walnut paste; Pkhali, a paste made from spinach, walnuts, and garlic; and Qababi, grilled minced meat kebabs sprinkled with onion and sumac also made memorable appearance.

The party started promptly by 6:30 p.m. Guests were welcomed by the Ambassador of Georgia, H.E. David Bakradze, who has been serving as ambassador since November 2016.

For the first half of the party, Vlad Bregvadz, president of the Georgian Center honored several individuals for their outstanding contributions to the promotion of Georgian culture abroad. The first ever Georgian stand-up comedian George Bitadze, brought much laughter into the room as he adeptly layered in stories, witticisms, and anecdotes. Mamuka Gogiberidz and Giorgi Popkhadze, performed classical Georgian folk music and the popular and highly animated Georgian Flash mob, led by the talented Maya Monroe, and staged by Veronika Metonidze and Levan Chkheidze brought down the house. 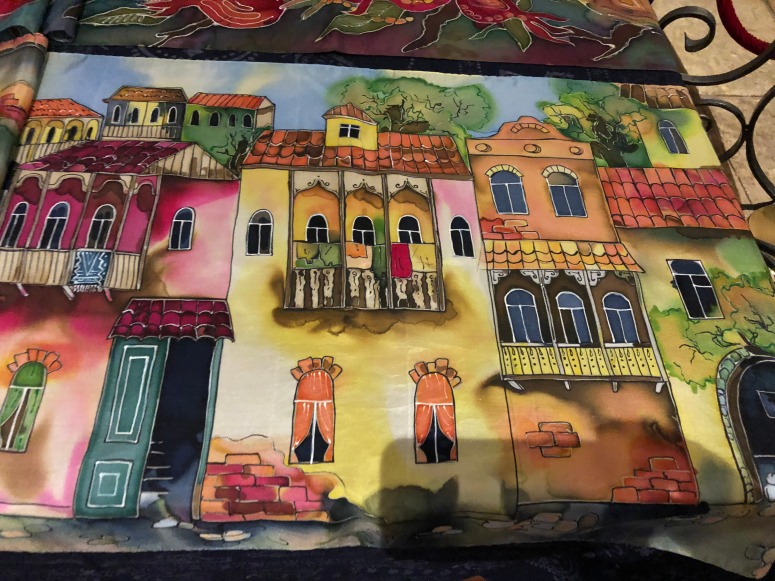 The food, people, and artwork brought me closer to a better understanding of Georgia. The food had a homemade taste, imitable to if I had a Georgian mom making this from scratch at home. The people were easy-going, warm, and wonderful conversationalists. I especially had a wonderful time getting to know the flash mob and learning more about Georgian culture from key figures from the Georgian cultural center too. The art left an indelible impression with me and I was able to see how beautiful the country side through a creative lens. Overall, I had a magical time and I look forward to attending more Georgian cultural events.

Feel free to make a charitable donation to the Georgian Cultural Center here.

The Georgian Center is a charitable 501 (c) (3) non-profit, non-governmental organization dedicated to promoting Georgian culture, education, and innovation in the United States of America.The Center is not financially supported by any government and relies on contributions from the diaspora and friends of Georgia.