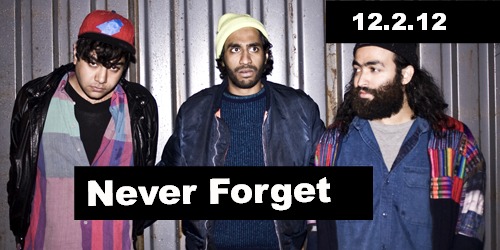 If you are an ardent fan of Das Racist, then I am sure you remember where you were December 2, 2012. The internet exploded that day with allegations, statements and some hyperboles about the rap-trio’s imminent breakup.  Upon hearing this dreadful news, I scoured the web for articles, sentiments and some sympathy towards this epoch  in Hip Hop History. But, alas, most music critics and bloggers were poking fun at the group’s break up.

Many bloggers and journalists  have proclaimed that these internet superstars, with their number one hit “Combination TacoBell/ Pizza Hut” had it coming, and  they should have broken up three years ago; Other’s were miffed that they broke up but barely shed a tear. As the lone music blogger who openly mourns this group’s demise, I am in a state of melancholy for this band. Several days before the band broke up, I  synced and loaded Das Racist’s two mixed tapes,  Shut up Dude, Sit Down Man,  into my I-Phone and Computer  . When news broke out that the band permanently disbanded, I felt like all my efforts went to naught. 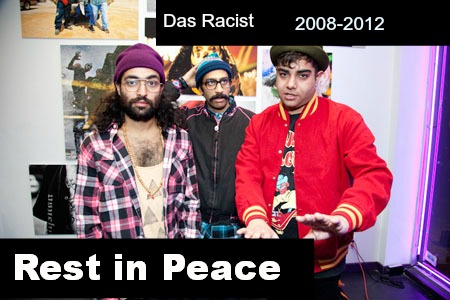 It’s been four days and I’ve been listening to an unending supply of Das Racist in my car, phone and computer. I don’t understand why Heems announced the breakup in Munich–the way he did–without consulting with Victor or even Dapwell ( we had an exclusive interview with him on our website not too long ago). Not even  our exclusive  interview with Dap left any kind of mentioning of a future break up. But it  instead pressed on about future tours, dates and songs for an upcoming album.

For Millenials, this rap group blurred boundaries, yielded relate-able jams about fast food and pop culture and has forever emerged as an internet wunderkind. Das Racist  lived and died on the internet.

I was surprised that no one really made any Rest in Peace Das Racist pictures. Okay Das Racist fans: Why not? It’s a sad time for Hip Hop fans across the world, and no one has the decency to make a tribute to this unique band. This band brought Desis and Hispanics into the rap scene and the least we can do is give them a warm thank you.  There are like a bazillion RIP Twinkie memes across the inter-webs but nothing for Das Racist!

Well, I decided to make pictures that I hope you all can use as a way to alleviate the grieving process.

As of right now, I think i’m at the fifth, and FINAL stage of my grieving process and have finally accepted that the band is not a band anymore. I mean they were suppose to perform at Virgin Free-Fest in September of this year but they were definitely a no-show. I thought the people at Merriweather Post Pavillion were being cruel when they promulgated that the band broke up.  But maybe there was some credence behind those widespread rumors?

Kool A.D said he left the band two months ago.  I don’t know what to believe anymore.  If you, like me, are grieving something that once burned so bright that the stars in the sky actually made sense. Listen to these Das Racist tracks that I heart. It will mitigate the pain, I hope.

Estimate of All Event Ticket price ranges are shown above each post.