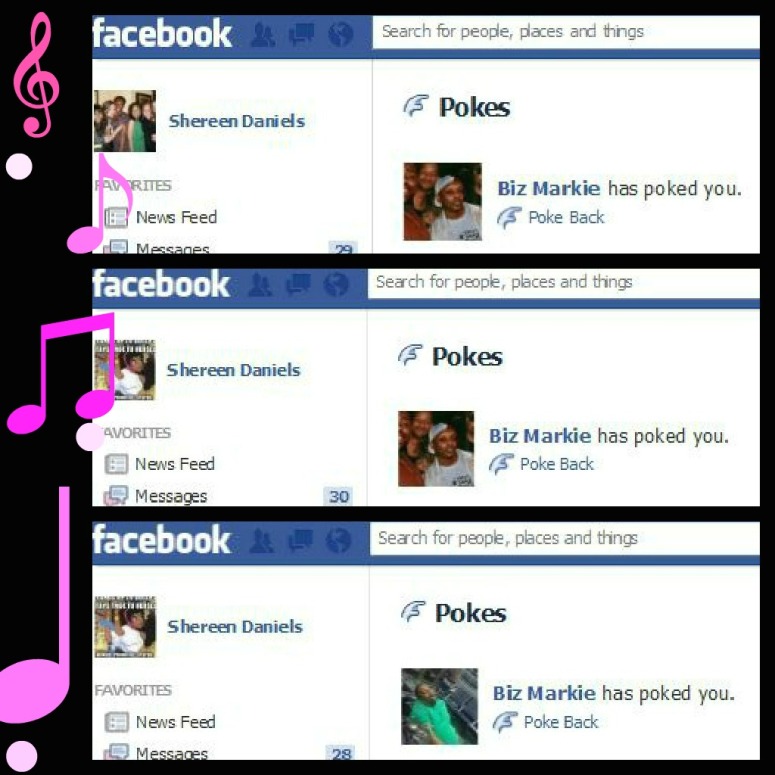 Obviously, I am a die-hard Biz Markie fan. He’s the best hip hop artist I know and I do bother him on Facebook and on Twitter.

After blogging about him for a year, Biz finally comes around and pokes me. Two months ago, I complained to him ,via Facebook, that everyone else has met him except me. As soon as I poured my heart out, in under 40 characters, the unthinkable happened.

Biz started to poke me on Facebook. He doesn’t just poke me once a day either. As soon as I poke him, he expedites the process and pokes me back, just as fast.  At first I thought he was using an online Facebook tool that automatically pokes people back since this whole encounter seems so unlikely.

I mean, why would this major Hip Hop star bother to poke a hum-drum blogger like me? I haven’t really contributed to the entertainment business like him or changed the world.

I messaged him, out of the blue, and asked him that same question. I asked Biz if he was using a tool, like the one Firefox created, to do automatic Facebook pokes or if he’s poking me for real. Biz replied back and said he does the pokes himself.

I was so floored that he even replied back. OMG! My favorite Hip Hop artist of ALL time replied back to this lowly blogger.

I know this is legit since this is Biz Markie’s personal account, and even the press uses it as a viable source for obtaining information on him. After MCA, from the Beastie Boys, passed away, TMZ used Biz’s status on his remorse as part of their news update.

Yes, this is actually Biz Markie’s profile and he does care about his fans. Even small fans like me.

Biz Markie is the nicest celebrity you would ever meet. This is what I read on several entertainment polls on the nicest/meanest celebrities out there.

Not surprisingly, Jennifer Lopez, Cameron Diaz and Ryan Gosling are known as being super mean and haughty towards fans. Yeah, totally not surprised by that.

It was just a year ago when I had a Facebook chat conversation with Biz, himself.

Biz was super nice and let me talk on and on about loving him, his album “Weekend Warrior” and gushing about the song “Throwback”.

Thank you Firefox, for helping me preserve these amazing social media memories. And double thank you to Biz Markie, for being uber nice to all of your fans.

Estimate of All Event Ticket price ranges are shown above each post.